One of those typical Mendip winter days – grey, damp and the forecast is for it to be very damp. Following a conversation I’d had with the farmer on christmas eve and a previous visit with the kids, before the digging session we ventured up to have a look at an interesting exposure of Triassic rocks – mostly of Dolomitic Conglomerate. 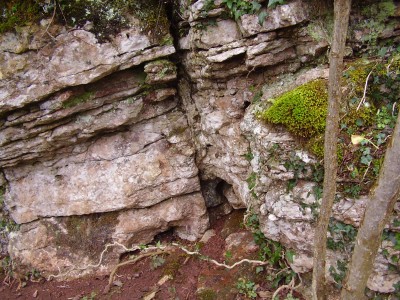 There are a number of interesting features that are worth looking at and a couple are depicted in the photographs above and below that might be evidence of some initial cave formation processes within Dolomitic Conglomerate. We will return to this area to carry out a field survey and comparison of strike/dip angles with those at Hallowe’en Rift area. 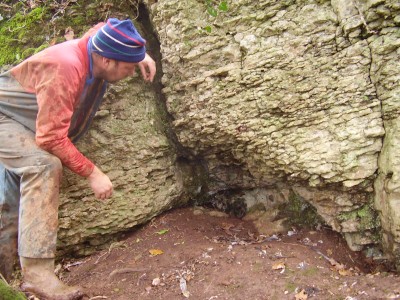 After our detour we decided to return to the prime objective – digging in Hallowe’en Rift, especially as the weather was closing in. Cleared out Witches Cauldron of last sessions digging spoil and that was enough, very claggy. I returned to the surface to emerge in some very low cloud, waited for quite some time for Alex to return. Alex had a bit of an ‘epic’ – at the bottom of Witches Cauldron where it is rather restricted for space Alex’s foot had slipped into a narrow rift filled with ‘gloop’ and while we had been working away, his foot became stuck fast and had required a considerable effort and some contortion to extract it. He arrived at the surface rather relieved not to have sacrificed his wellington boot! 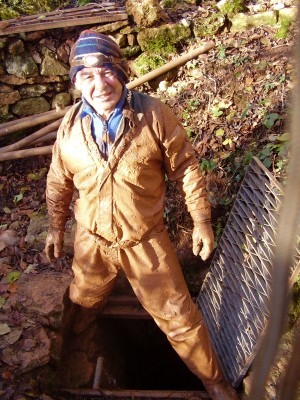 My turn to be the ‘mud monster’ and soak up all the water, get’s rather cool after a couple of hours. This kit was clean at the start of the session, note the ‘natty’ caving hat.

After a chinwag with the farmer and his son we wandered up to Hallowe’en Rift in bright sunshine but a rather chill wind. The spoil was all cleared last weekend so straight into digging mode, I went to the end of the tube, Alex settled in at the base of Witches Cauldron. Very moist along the tube so decided to load spoil directly into the skip, nice drip into the ear. Continued to work under the rift and pulled out a number of small boulders which is interesting, these boulders appear to be mostly conglomerate although there is some calcite present. Need a slightly bigger bar that will be more effective in working the compacted sediments. Meanwhile, back at the Witches Cauldron, Alex was busying himself by digging out the base of the pot after hearing a trickle of water. Digging was ended when all the stacking space was filled, another clearing session next trip. Retired to the Hunter’s Lodge Inn for a pint and a cheese and pickle roll, in my opinion the greatest hostelry in the land – marvellous! 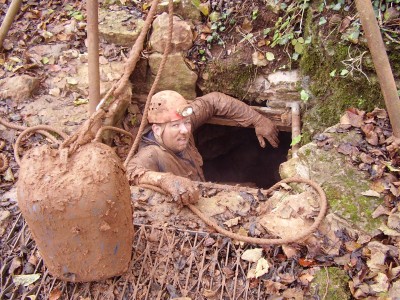 Alex emerges from Hallowe’en Rift after soaking up the puddles in his nice cotton ‘blotting paper’ overalls, damp and very muddy. I, on the other hand, was rather more comfortable in fleece suit and cordura caving oversuit.

Spoil clearance session with Alex. After getting changed at the farm and ready to go, we had to return to BEC HQ, The Belfry, to get the spanner that we had forgotten again! Eventually got up the hill to Hallowe’en Rift and set about putting up the tripod ready for hauling. Alex went down to the bottom of Witches Cauldron and cleared the spoil from there and I hauled and dragged the skips to the base of the entrance. It’s become pretty mucky along the passage, but at least the skip is suitably lubricated and slids easily. We then set about clearing the spoil from the base of the entrance back to the surface, I did the hauling up the rift while Alex was at the bottom loading the skips. Lot’s of room for dumping the digging spoil now.

With Alex. Well, the original plan was to clear out all the dumped spoil back to surface, but someone forgot a spanner to erect the tripod – so continue digging was our only option. As usual we cleared the base of Witches Cauldron before I headed off for the tube. It seemed particularly sticky today like trying to cave through ‘velcro’, there is not enough space to free your oversuit from the clag and in the more snug spots it can be a little ‘hard going’. Continued clearing the sediment at the end of the tube and did manage to get a better look at the rift but am still a little undecided about the best way to proceed – don’t want to leave myself in a position where collapse of the sediment overhead might pose an inconvenience. Air movement was not as obvious during today’s session. 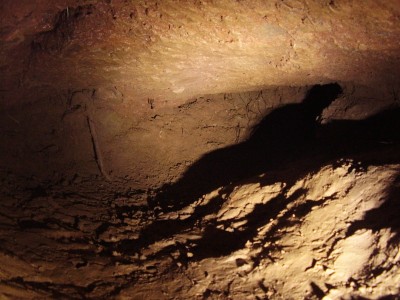 The bar to the left of centre in the image is about 300mm in length.

Solo trip. Just a quick Sunday morning jaunt to take some photographs of the end dig in order to update the online gallery before retiring to the Hunter’s Lodge Inn. 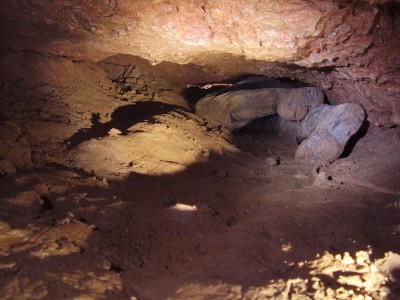 The image above shows Alex working his way along the approach tube from the base of Witches Cauldron to the dig site – a fine spot!

With Alex. Continuing the quest for passages measureless to mice! First job was to clear the spoil dumped at the base of the Witches Cauldron before returning to digging along the left-hand tube. The pot/rift edge noticed last session can be seen (take a look at the photo taken on 20th and shown on the post for that day) but some more forward progress still required before a ‘good old prodding’ is possible – might be a good idea to wear some goggles as crap falls into your face when lying on your back and waggling a bar around in an effort to dislodge a blockage above your head. There is certainly a change occurring bur more work still required. The dig has become a little squalid over the past week or so – the result of a strong drip, or lots of drips, obviously the surface above ground has become saturated and the water is permeating into the cave, emerged rather muddy, slightly knackered, but rather satisfied after a steady 2.5 hour session.