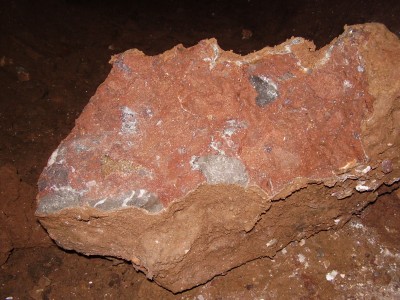 Boulder of Dolomitic Conglomerate removed from Hallowe’en Rift, the purple-red colour is the result of high iron content and evidence of haematitization (see below).

On the Mendip Hills, the Dolomitic Conglomerate mostly comprises clasts of Carboniferous limestone cemented into a matrix of sandy marl or fine grained limestone debris, locally derived material from the Old Red Sandstone and Quartzitic Sandstone Group is also present. The rock clasts are angular to rounded and range in size from varying sized gravels to very large boulders. The Dolomitic Conglomerate forms bold crags, it might be eroded into gorges, and it can support underground drainage systems including caves and swallets and is the locus for extensive lead/zinc mineralization. The formation represents Triassic scree and outwash fans adjacent the ancient hills of Paleozoic rocks, and it fills ‘fossil’ wadis or gorges that had been cut into the hills. Recent erosion has partially re-excavated some of these gorges, as at Burrington Combe. 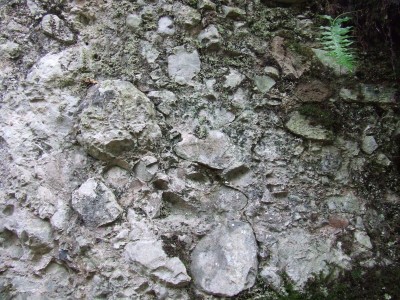 The conglomerate found on the Mendip Hills has, in many cases undergone considerable secondary changes, in particular silicification, haematitization and dolomitization. Haematitization is the conversion of the conglomerate into an ‘earthy’ iron ore known as ‘red ochre’. The presence of all gradations from unaltered conglomerate to impure haematite rock show that the formation of the latter is the result of metasomatic replacement of calcium carbonate by haematite.

The most widespread form of alteration is dolomitization, hence the name ‘Dolomitic Conglomerate’. All stages of dolomitization are present, both matrix and clasts showing varying degrees of alteration. Dolomitization is usually accompanied by hydration or partial hydration of the originally disseminated haematite to limonite so that macroscopically the colour has changed from red to yellow and yellow-brown. Dolomitization affects more than one level in the Dolomitic Conglomerate though it is most marked in the upper parts of the succession.

metasomatism is a metamorphic process [where rocks are changed by heat, pressure and fluids] in which the chemical composition of the rock is changed significantly, usually as a result of fluid flow.