Without a full team to dig nothing for it but to carry out a survey of the Hallowe’en Rift east side extension and to take a couple of photos at the end of Trick or Treat?
Surveyed length is probably in excess of 50 metres, need to do the maths for the final length.

Image below: Tav entering the inclined bedding beyond the second chamber. It’s actually bigger than it looks! 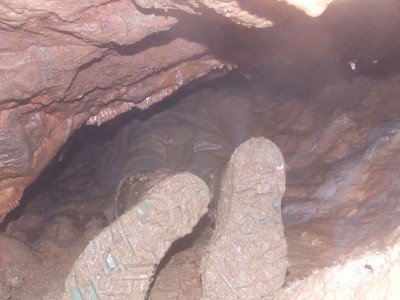 After a second look a plan of action has been formulated and initially we will clear away an accumulation of loose debris which will give a better view of what lies ahead and then we will dig down dip to open up the existing airspace and, hopefully it won’t be long before we add some more length to Hallowe’en Rift.

There will be a PowerPoint presentation (see below) about Hallowe’en Rift at tonight’s J’Rats Digging Awards at the Hunter’s this evening.

It’s quite a large file so be patient and give it some time to load, it’s worth it! Click on slide show and run it from the beginning, turn on your audio there is a soundtrack. If you are of a nervous disposition don’t watch it alone at night!