With Jake, Tav and Alex.

Tav had bought along his survey kit so we quickly did a couple of legs from the top of the pot to the present dig, total length c.14m and trending N-NW into the hill, just what we want! 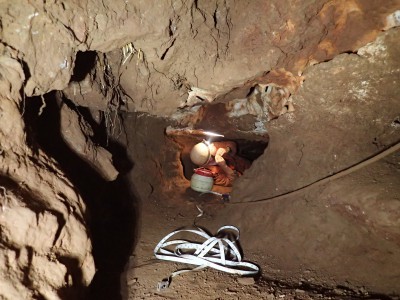 Tav re-adjusting his attire after surveying.

Vince digging, clearing away the blast debris, Tav loading the skip with bags and rocks, Jake drew the shortest of straws and was on the haul and shuttle with Alex on the surface.

At the end there was plenty of gravel -20 bags of it- and numerous rocks, barred away fractured rock from the left hand wall and in the floor, it was warm work.

As things started to slow down, the blast debris being mostly cleared, I began to pull some cobbles and small boulders away from the end of the rift to reveal an open space below. There is a drop c.1-1.5m and a continuation of the rift c.2-2.5m and c.0.5-0.7m width. There are a number of loose rocks, most of these appear to be of detached, degraded flowstone and a good draught.

While manoeuvering a boulder out of the way my headlight became detached and fell through the narrow opening down into the rift, I had to retrieve it. After quite a lot of hammering I eventually managed to squeeze into the rift and reached my light but I couldn’t really do or see anything else. Will have to arrange another mid-week visit to widen access into the rift and enable the removal of rocks and sediment.

Digging over, it was time to make our way down to the farm, get changed and up to the debrief in the Hunter,s, satisfied with the mornings effort.