With Jake, Tav, Brocker’s and Jonathon.

The blast didn’t have the desired effect, there is some deep fracturing but not enough to allow widening of the passage, still too tight to remove. I cleared away the debris that had been created, but digging was going to be slow, so Jake came to the end to dig the high-level blockage to the north-east, while I continued to scratch around the potential lead to the west, ready for an attempt at induced rapid speleogenesis here. I will, probably concentrate on the roof, where there is solid rock, the lower blockage appears to be heavily calcited gravel, cobbles, etc., this is not easy material to deal with.

The way to the north-east did not develop any further, a narrow inlet trending north and calcited, it was, however bought to a conclusion. 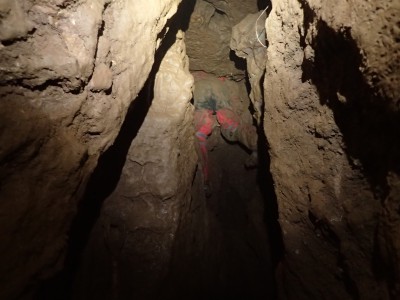 All that was required now was to clear the pile of rock and fine sediment, that Jake had dug out, including some quite large boulders.

Everything, was cleared to the surface, and there is another supply of rocks for the wall.