Brockers, sporting a pair of dapper orange dungarees, in a ‘Southern Comfort’ style, was on surface duties; Jonathon on the haul and shuttle; I was on top of the slope. Jake was on the slippery slope leading to Another Emotional Journey, where Nick, assisted by Tav, was digging.

Bags and rocks were coming through at a steady rate when, there came a lull in proceedings as Nick moved a large slab of rock that became wedged tight in the fissure, effectively preventing any more forward progress. Then followed the sound of the rock being battered with the sledge hammer, the rock finally succumbed, and was moved to one-side with some difficulty, and there it remains. Bags and rocks started to be moved-out again. The dig face has become a little squalid, Nick started to show signs of despondency, this is not permitted and Tav told him to get on with digging.

At the end of the session, 80 loads shifted out to the surface, 64 bags and 16 skip-loads of rock. 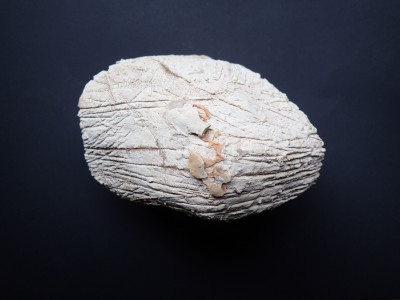 Above image is ‘rock of the day’, it has some interesting striations, presumably these were formed during sediment transport in a high energy environment.