With Jake, Jon and Tav.

A small team for a Saturday again, no bother, still plenty to keep us occupied.

On arrival at the farm, it appears that the ‘Bambi-Man’ is not pleased with us and had left us a little note: 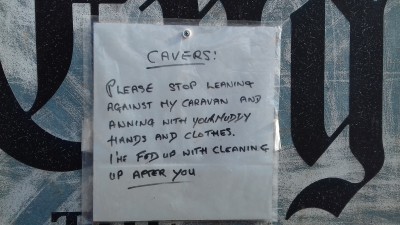 Some people are so tetchy about their ‘sheds on wheels’!

At the end of Another Emotional Journey, I went ahead to check Tuesday’s effort before Jon started digging, all was good. Tav was second in-line, on the long-drag back to load the skip to me, on the slippery slope, where I man-handled the bags and rocks up-slope and loaded the skip to Jake, on the haul and shuttle. As usual, the spoil was stashed at the bottom of the entrance rift, to be removed later.

The ‘mud-crete’ had set, making a smoother drag-run for the skip, although the skip eventually succumbed, and a replacement was required, the skip had been in a poor state before today’s effort began.

It was another good steady session and a total of 58 loads were cleared-out to the surface; 41 bags and 17 skips of rocks.