With Dr Gina Moseley, Dr Marc Luetscher and Roz, we were later
joined by Ray Deasy.

Gina and Marc are Palaeo-climatologists, with a specific focus on
cave sites, and had accepted an invitation to visit Hallowe’en Rift and comment
on the processes that might have caused the damage to the speleothems and to
look to see if there are any deposits of cryogenic calcite. Some time was spent
in the rift in An Unexpected Development discussing the processes that might
lead to a cave becoming filled with ice during periods of fluctuating temperatures,
other thoughts were also expressed. Unfortunately, despite a thorough search no
cryogenic calcite was found, Gina suggested that perhaps any CCC’s had been
buried under later sediments. It was an enjoyable and informative trip. 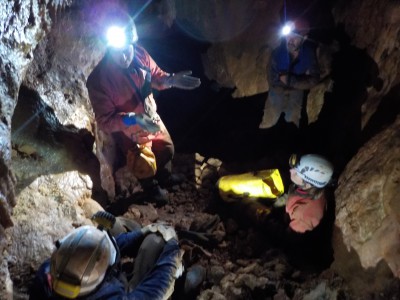 Ray was late arriving at the Hunter’s this morning and had missed
a ride down to the farm. Not to miss out on a caving trip he continued his bike
ride from the MNRC down the hill to catch us up. We had already walked up to HR
and were underground, Ray met us at the rift. After the trip he insisted on
pedalling back up the hill to the Hunter’s, in his wet-suit, to meet up with
Tangent and go digging in Stockhill Mine Cave.