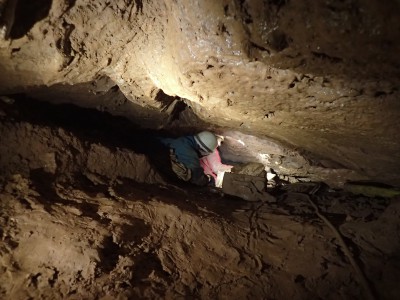 Tav and Nick discuss prospects to the south.

After some heavy
rain during the week, it was obvious to us that Tav’s pump was going to be
required. The pump was set-up and proved to be very effective, the water soon
was drained away. 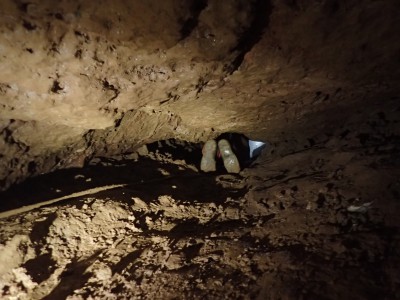 Duncan gives Brockers a helping hand to set-up the pump.

The water gone,
Brockers was able to dig away to his heart’s content. Merrily filling bags,
some of them with very sloppy sediment, and loading rocks into the skip. Duncan
was next in line, lying in the small chamber, aiding the skip along its route
to me at the junction. Once again, I had made a small error and suggested Nick
might go south and dig there. He was in his element. It was a busy session for
me, Tav at the bottom of the entrance and, especially, for Jake who hauled up ~85
skip-loads to the surface; ~70 filled bags and ~15 loads of rock, including one
rather weighty boulder that required the use of the strops. Good wall building
material though.

With, probably,
the two most enthusiastic ‘fillers of bags’ digging in tandem, it was necessary,
at times, for me to decant some of the bags to more suitable weights for
hauling out of the cave, and so easing some of the pressure on Jake’s back. At
the close of the session, Nick found some large boulders that he happily
reduced in size to more manageable proportions. These were then rolled to the
bottom of the entrance where they await extraction.

It had been another
productive and convivial digging session, rounded off with a stop at the Hunter’s
Lodge Inn for the customary refreshments.

NOTE: the digging effort, at present, is concentrated on the enlargement
of the north-west leading passage, to the south-west side of the entrance (towards
Trevor Hughes old dig). Also, there has been some activity in the opposite
direction on the south-side.