Slight change of plans deciding on a solo digging trip in Hallowe’en Rift. Took a few snaps, not all that successfully. 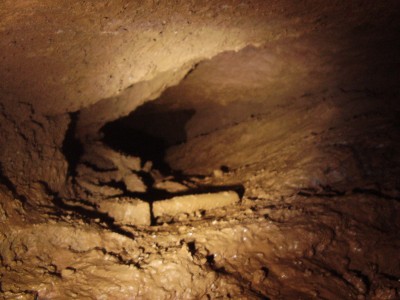 The above image is looking into the left tube from where the rib of rock used to be.

Dragged a couple of skips full of sediment down the tube before deciding to leave the spoil to one side to be removed at a later date. Pushed ahead for just over a metre, it’s a rather snug fit along the tube and pretty cool in the draught. On the right hand side there was open space, albeit small, and the roof appears to rise sharply. Worked along the left side where there was slightly more height, from where I moved some more sediment with the occasional rock opening more air space, again the roof appears to rise sharply after a metre. Unfortunately further progress was barred by a large slab of flowstone that resisted initial attempts to move it, dug around it for a while then decided to call it a day and will return when fresh. It’s now looking very, very interesting!