Not one of ours! 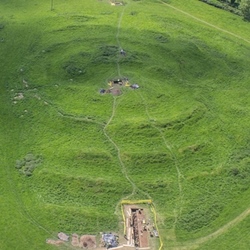 Remains of a baby dating back to 3,000 years ago have been
found at a site in Ireland that is believed to be the birthplace of Halloween.

The fully intact skeleton, possibly belonging to a 7-10
month child, was unearthed during a three week excavation at Tlachtga, on the
Hill of Ward near Athboy Co. Meath.

One of Ireland’s most enigmatic sites, the Hill of Tlachtga
features impressive circular earthworks which are best seen from the air.
Medieval texts link the site to Samhain, the ancient Celtic Festival which is
the precursor to modern Halloween.

“We may never know what caused the death of the child. The
skeleton probably dates back 3,000 years and was found on the bedrock at the
base of a 1.5m (3-foot, 28-inch) ditch,” lead archaeologist Stephen Davis, at
University College Dublin, told the Irish Examiner.

Excavation and surveys carried out using airborne laser
revealed the area was a “key ritual site.”

“The site has several different phases of monumental
enclosures and we believe them to be associated with festivals and rituals
potentially dating back as far as 1,000 B.C.,” Davis said.

Sitting on top of the Hill of Ward, Tlachtga is a site
steeped in folklore. According to Irish mythology, it got its name from the
daughter of the powerful druid Mug Ruith. According to legend, the remains of
the druidess, who is said to have died on the hill after giving birth to
triplets, are buried there.

Tlachtga is also believed to be the site of the Great Fire
Festival in which sacrifices were offered to gods on Samhain eve. All hearth
fires throughout Ireland were extinguished and then lit again from a central
fire on the hill.

Meaning summer’s end, Samhain was a great festival of the
dead — a time when the doorways to the otherworld opened and journeys could be
made from one side to the other.

The veil between the worlds of the living and the dead was
believed to be the thinnest on Oct. 31, a day which lies exactly between the
autumnal equinox and the winter solstice.

The excavation revealed the monument of Tlachtga is actually
the last of at least three phases of enclosure on the hill.

The excavations also brought to light evidence of burning,
which could have been ritual fires or the result of glass-making, Davis said.

He believes the child was most likely not the victim of any
human sacrifice on the ritual site.

The remains have been taken to the School of Archaeology at
University College Dublin for further examination.

Image: Tlachtga from the air. Credit: Excavations at Tlachtga via Facebook