With Brockers, Matt and Tav.

Brockers and Matt did the digging, stashing bags and rock in the Tuck Shop, Tav and me went surveying. Carried-out a line survey from the top of the pot through Merlin’s, and then went into the lower series to survey the passage to the north-west of T-Junction. It has been a little while since I last went along Toil and Trouble, a passage well-named. At the end, we could hear Brockers and Matt in the Tuck Shop, but couldn’t make contact, they were far too busy.

The abandoned dig beyond Nick’s pit prop ends in a sediment filled passage, there doesn’t appear to be any solid walls or ceiling, within the sediment are more detached lumps of calcite flowstone. The wooden prop has now carbonised.

When the surveying was finished, we returned to the others to start hauling some of the spoil out. We shifted the bags, leaving the rock in the Tuck Shop, the bags were left stacked in the entrance. 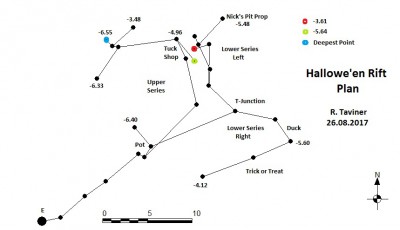 Tav, later drew-up the line survey and distributed by email. To the east of the entrance there is 110m (361 feet) of passage.