Tav digging, Nick clearing, I was on the slippery slope, Jake at the top, Alex on the haul and shuttle, leaving Jon on the surface.

On arrival at the end, we discovered, there had been a bit of a slump on the slippery slope, a large flake of rock had become detached and was now lying on the slope. It was an obstruction, that took a combined effort from me and Jake to ease down into Tuck Shop, along with another smaller rock that had also fallen. That done, we settled down to some steady spoil removal. Occasionally, the odd bag was topped-up with some of the loose sediment that the rockfall had brought down. At the end of the session, 52 bags and 10 skip-loads of rock had been hauled-out to the surface. Another good effort, the digging at the end is, somewhat, constricted. 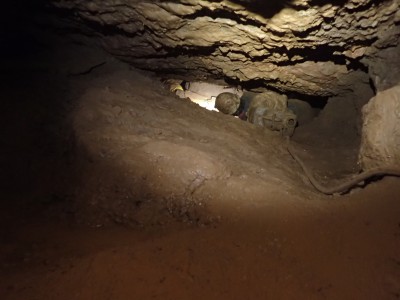