With Jake, Jonathon and Ray Deasy.

An, otherwise, small team assembled bolstered by the unexpected, but welcome, arrival of the antipodean contingent – Ray.

At the end of the current focus of attention, I was digging, filling bags and removing rocks, passing the spoil back to Ray, who was clearing and loading the skip to Jake, on the slope. Jonathon was at the top of the slope, where the bags and rocks were stored, ready for removal later.

Initially, I opened-up a small connection back towards the slope, this will allow for an easier passage of the skip. There is a lump of rock causing an obstruction that will require some attention, another trip in with the capping kit will sort this out. That done, attention was concentrated on making some forward progress. Although awkward in the constricted space, it is enjoyable digging. There is some clear space over the top of the sediment, but it is small, we are, at present, following a fine, phreatic arched ceiling. Every now and then, some fractured stalactites are found within the sediments, along with sections of detached, broken calcite floor. 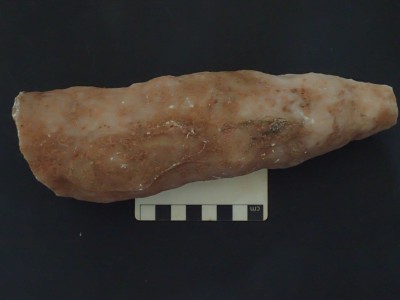 Digging isn’t speedy in the rather snug passage, there is some air movement, Ray wearing cotton overalls was getting a bit chilled as the session progressed. It was soon time to move back and clear the spoil from the cave. I was amazed at the tidiness of Jon’s bag stacking and the temporary drystone wall created from the rocks removed. Today’s total, out to the surface was 30 bags and 10 skip-loads of rocks.

Another fine well-being session for the OCD – Obsessive Compulsive Diggers!