Due to meetings, work commitments and some
other reasons the Wookey Hole digging team was rather depleted only Jake and
Jonathon were available. Not much the two of them could achieve in the sand dig
in 20 so they went to Hallowe’en Rift.

At the draughting dig, the floor was lowered,
the filled bags and rock stacked in any space available, and the large slab of
degraded flowstone removed and reduced to more manageable pieces. The way ahead
is still obstructed but the digging is easier, mostly smaller slabs and finer
sediment.

The team were enthused when we met-up later
after the progress meeting with Wookey Hole Caves. 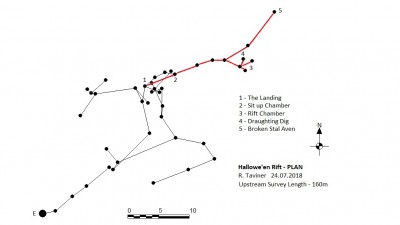