A bit of a consolidation session was planned
for this morning. Brockers and Nick set off into An Unexpected Development
descending the rift to start digging at the bottom, Brockers re-rigged the
ladder and line on the way. Jon and I helped carry tools to the rift before
marking-out a pathway to avoid the formations along the approach passage to the
rift. Duncan and Tav were surveying, while Alex went to some less well visited
areas in the cave to collect the tat that has left behind, a cave de-clutter is
going to be done.

To the right-hand side of the breakthrough
point into An Unexpected Development, another small gap had been noticed. While
surveying on Wednesday evening, Duncan and Tav had recorded a length
of 6m with the Disto X, an upper continuation of the passage beyond some
calcite formations. Me and Jon decided to enlarge the gap and see what lay
beyond. After clearing away the loose gravel and cobbles we encountered a
rather obstinate boulder that, at first, I thought was solid floor, but after
scratching around it for a while, I managed to jam the small pick under an edge
and it moved. Eventually, we managed to remove the boulder and with a bit more
digging I was able to wriggle through into the passage beyond. I went forward a
few metres to look around a left corner and returned, “better get the others” I
said to Jon, who was busy enlarging the squeeze. Jon went to the rift and
called down to Brockers and Nick. When they reached us, Brockers went on to find
Duncan, Tav and Alex. Jon and I continued to enlarge the squeeze and wait for
the team to arrive.

We were sat at the corner, when voices could
be heard from a small hole above us, there is a connection to the small rift
chamber before the low crawl to An Unexpected Development. All assembled,
Brockers led the way followed by Alex and the rest of the team. A sizeable well
decorated chamber was entered. There were some big formations, again with
evidence of fracture and re-growth. Around a right-hand corner the passage
closed-down, although continuations beyond some calcite formations and a low
sediment filled bedding were noticed it was thought these probably led to known
sections of the cave. Later, the survey confirmed this. Not worth pursuing. While
Duncan and Tav surveyed the new section, I went to join Brockers and Nick
digging at the bottom of the rift, Jon and Alex continued with the
de-cluttering.

It was soon time to exit the cave. On the
surface, a brief discussion as the cave was secured, 30m is the surveyed
length of the new extension, 80m in a week. Another very satisfying session!

Below, the latest line survey carried out by Duncan and Tav, later, drawn by Tav. 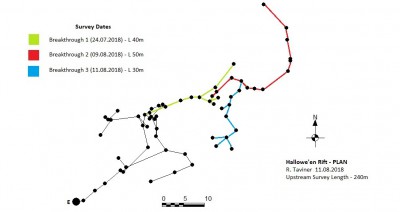 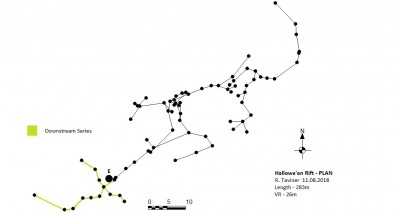