With Nick, Jonathon, Duncan and Tav

On recent trips into Hallowe’en Rift it has
been observed that along the hands and knees crawl from the entrance to Stal
Bend, there is a significant scatter of moth wings, Tissue moths (Triphosa dubitata) are common visitors
to the cave. I assumed they are being predated by spiders, Meta sp., the soft
body parts consumed, and the wings discarded.

Duncan and Tav continued the G5 survey. The
rest of us went to the bottom of the rift in An Unexpected Development and
continued with the dig. I was digging, filling the skip, Nick was hauling it
away and emptying the contents, Jon continued the construction of the retaining
walls. Initially, the effort concentrated at the very bottom until it was
decided a well developed stal boss was blocking the way. Moved back a little
bit and started to clear away the debris against the left-hand wall, towards
the end of the session air movement was detected.

Took some more photographs before climbing
the ladder, exiting the cave to join the team at the entrance. 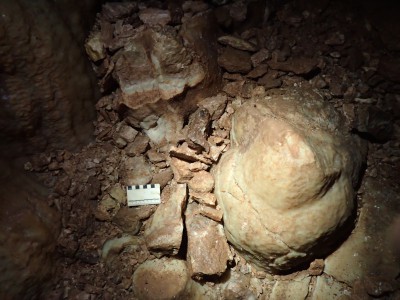 Frost shattered calcite forms the sloping floor of the rift, An Unexpected Development. 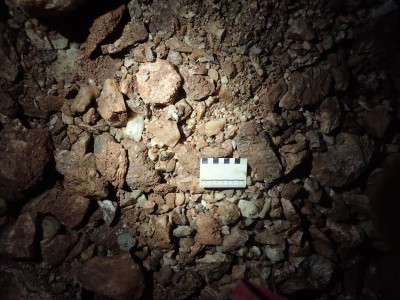