With Brockers, Nick, Jon and Tav 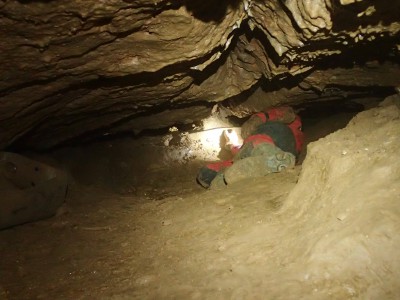 A view from the Junction. Jon to the north assists with the pipe from the pump. To the east Tav, at the bottom of the entrance, contemplates, it was sunny on the surface. 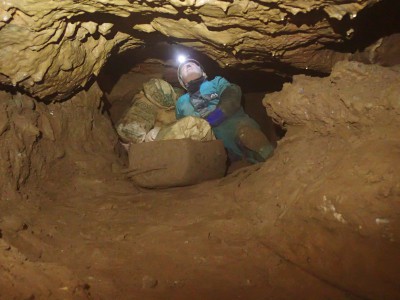 Today circumstances dictated that the digging effort was to be
concentrated beyond the former ‘pinch-point’ in the cold, Gnarly North. The perceived
‘dry and dusty’ conditions did not come to fruition and pumping was deemed to
be required. Unfortunately, this action was a failure, the pump sprang a leak and
did not work, so the pump and all its attachments were removed to be fettled,
back at Tav’s place. This left Nick and Brockers to wallow in a larger than
anticipated pool of slurry at the digging end. They said it was cold, how we
chuckled. Earlier in the session, another skip had been put together and this
was set-up from the dig to the ‘snug’ spot where Jon was lying. This too,
became ‘damp’ as the spoil was transferred between skips. I was at the Junction
and Tav at the bottom of the entrance, where the filled bags and rocks were to
be stashed awaiting removal at the end of the session.

The bags were filled partly with sediment, partly with slurry, it
was a good job that the sediment was granular. It was, rather forlornly, hoped
that the water would drain out and the bags become a bit lighter, it didn’t,
and they weren’t. The skip between myself and Jon soon wore out and became
difficult to haul, so that was replaced, and the hauling was much smoother. Most
things, by now, were liberally coated with slurry and splashbacks were a common
occurrence.

Soon the time came for digging to cease and for the entrance to be
cleared of spoil. The bags hauled out to the surface to be emptied, the rocks
piled ready for walling, a few were added to the wall as a token gesture. Those
of us on the surface rotated the hauling, leaving Brockers, who had been digging,
to load the skip to the surface. This he wasn’t so impressed with, he reckoned
he was cold after lying all morning in the slurry pool in the cold, Gnarl
North. We, however, were warm in the very pleasant spring sunshine – warmest day
of the year so far, I believe. 49 bags were hauled out and emptied plus 10
skip-loads of rock.

Satisfied with the morning’s endeavours and in high spirit, we
departed and made our way to the Hunter’s Lodge Inn for the usual refreshments.